“Why do people have to be this lonely? What’s the point of it all? Millions of people in this world, all of them yearning, looking to others to satisfy them, yet isolating themselves. Why? Was the earth put here just to nourish human loneliness?”

My first Murakami novel was Norwegian Wood. It is the coming-of-age story of Toru Watanabe and his love for Naoko. Toru adapts to campus life but he is lonely and feels isolated from his peers. Naoko finds it difficult to face the responsibilities and pressures of everyday life. As she retreats further into her world, Toru is drawn to an independent and sexually liberated Midori. It’s a poignant tale of love and loss. I read it when I was in college and Murakami left a deep impression on me.

Why I love reading Murakami? There are many reasons. I love how his protagonists are ordinary people like you and me. They are people with dreams, hopes and regrets. They are flawed and their thoughts and feelings resonate with us. That’s what makes them so relatable. Murakami writes about everyday life and creates magic with mundane routine.

Murakami makes me wonder. I ask myself a lot of questions when I am done with his novels. Sometimes I am simply marveling at the wisdom I have found in his books and sometimes the ambiguity confuses me.

“And once the storm is over you won’t remember how you made it through, how you managed to survive. You won’t even be sure, in fact, whether the storm is really over. But one thing is certain. When you come out of the storm you won’t be the same person who walked in. That’s what this storm’s all about.”

Murakami’s works have a fluid quality to them. There are things you understand when you read his works at any stage in life. But if you were to reread his books in a few year’s time, whatever personal experiences you’ve had in that period, will change your perception of his work. I have read Norwegian Wood and Kafka On The Shore numerous times and every time I have interpreted it differently.

Memory, time, music, alienation, nostalgia, isolation, loss, love, the nature of evil- these are some of the common motifs which occur in Murakami’s works. I am not claiming I understand his work. In fact, I think it’s impossible. Why I love Murakami is because there is a sincerity in his writing, a simplicity in all the complexities in his books. The metaphysical blends with the real world, cats talk, fish fall from the sky, women disappear, deep wells, a chaotic world, deep suffering and a strong current of loneliness and isolation runs deep in Murakami’s world. You can’t help but marvel his fierce imagination.

Murakami’s universe is highly deterministic (an idea which he explores in Hard Boiled Wonderland and The End of The World) and the characters have no control over it. It, sometimes, looks like a dangerous place. But he also saves this world by filling the books with small graces and miracles, which is why Murakami gets tagged with the phrase “magical realism”. Toru Okada’s wife leaves him, but his cat does come home. Hoshino and Nakata form a deep friendship and both are changed for the better by the experience. I think he focuses  on pop culture references not just to be cool, but because they often signify “the little things in life” that get one through the hard times. A nice lemon drop. A bowl of steaming pasta. A cup of coffee.

There is no straight answer in Murakami’s world, no concrete ending. There are endless interpretations and limitless possibilities. Such open-ended conclusions is so frustrating right? But hey! Isn’t that what life feels like? An endless quest for meaning with no conclusive answers? 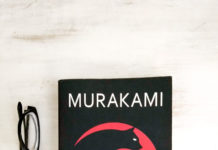 THE BLUE LOTUS: MYTHS AND FOLKTALES OF INDIA- BOOK REVIEW